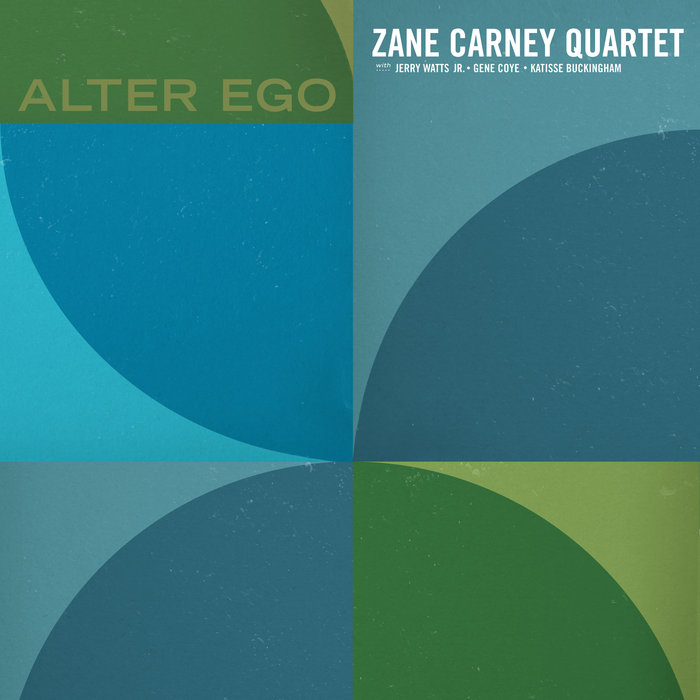 “Alter Ego” embodies an adventurous new wave of free improvisation, along with modal jazz in its most electric, high-octane form. The album features a series of improvised compositions, experiments, and sketches, as well as two rearranged standards. It consists mostly of first takes, with no editing, and aims to subvert convention. In addition, all tracks were mixed from the drummer’s perspective, placing the listener in the middle of the live action, on stage with the group.

“I wanted this record to feel alive,” said Zane Carney. “This is the first time my actual improvisational spirit is being expressed in recorded format. I wanted to capture the sparks that fly when Jerry, Gene, Katisse and I improvise together, and document the untamed, almost manic spirit that LA’s late night jazz scene has produced: there is a certain energy and freedom that transcends genre. West Coast jazz is genreless, it’s reckless, it’s audacious, and it pushes boundaries. In order to summon that ferocity, we approached this session as one might approach an unmoderated debate: no judgement or rules, freely exploring new lands harmonically whenever a member felt like leading the charge. I wanted us to be as nimble and agile as possible so we could access that core flow state more readily. Every one of us served as a conversation-leader at different points on the record, and I think you hear that especially on songs like ‘Alter’ and ‘Lost.’”

Listeners will find a compelling melding of modern jazz performance that’s been balanced by a fully analog, straight-to-tape vintage recording process. Carney is playing a custom, modified Fender, which he built using a Broadcaster neck and a Telecaster bridge pick-up, to create his signature sound. He used old-world and new-world guitar pedals and played them through a custom Siegmund Sound King, powered by a 1940s pair of 300B television tubes. “The goal was to contrast our current jazz vocabulary with old technology, and see what happens when modern jazz is played with rare, modified instruments and recorded in a fully analog process” Carney added.

The album opens with “Brain Freeze,” drawing listeners in with a meditative, haunting melody before bursting into an explosion of textures, patterns and colors, then promptly clearing the canvas for a flute/guitar battle. This sets the stage for a stream of multilayered experiments, provocative inquiries, and jarring juxtapositions, from “Alter” to “Lost,” “Found,” and finally, “Ego.” The two standards on the record showcase distinct choices: “Oleo” revisits the classic melody with an absurdist chromatic twist, while “Minority” is turned on its head as a new-wave samba.Throughout the record, listeners may recognize guitar tones that Carney developed over the years with his various solo and group projects and collaborations, now applied in an improvisational jazz setting. As the record unfolds, tape crackling and hissing, it leads to “Things You Aren’t,” a vulnerable, intimate solo guitar piece, continuing the conversation between past and future.

At its core, “Alter Ego” revels in tensions and the new possibilities they open up. It calls for a full immersion in the present moment and seeks to expose a side of West Coast jazz that’s mostly unchronicled. Zane Carney’s quartet prompts the listener to probe and question jazz norms while investigating what creates those perceptions as the album shape-shifts from track to track. Fittingly, it mirrors the bandleader’s mission: throughout his career, Carney has made a point to defy genre expectations and refuse all stylistic affiliations, his playing standing out on its own.

Zane Carney is a jazz musician, composer, and Grammy-nominated guitarist, hailed as a “massive guitar player” by Thundercat and named “the future of electric guitar” by HuffPost. His new quartet record, “Alter Ego” will be released on April 30 on Orenda Records. Carney’s discography includes playing on Thundercat’s “Drunk” and serving as John Daversa’s guitarist with appearances on his Big Band and Small Band albums including “Kaleidoscope Eyes,” “Junk Wagon,” “Artful Joy,” and “Wobbly Dance Flower” featuring Bob Mintzer. Over the years, he has performed with Kamasi Washington, Ronald Bruner Jr., Brandon Coleman, Cameron Graves, Nir Felder, and Sam Gendel, among others. Most recently, he developed a film scoring partnership with Grammy-nominated pianist Tommy King, releasing a duo record titled “Film.” Carney’s previous record is “Amalgam.” Prior to that, he served as lead guitarist, arranger, and founding member of CARNEY, a critically-acclaimed jazz-infused rock group that opened for U2 and was signed to Interscope Records. As a guitarist, he toured with artists including Jonny Lang and John Mayer. Carney was born in New York City, studied studio/jazz guitar at USC’s Thornton School of Music, and currently resides in Los Angeles.
For more information, go to www.zanecarney.com.