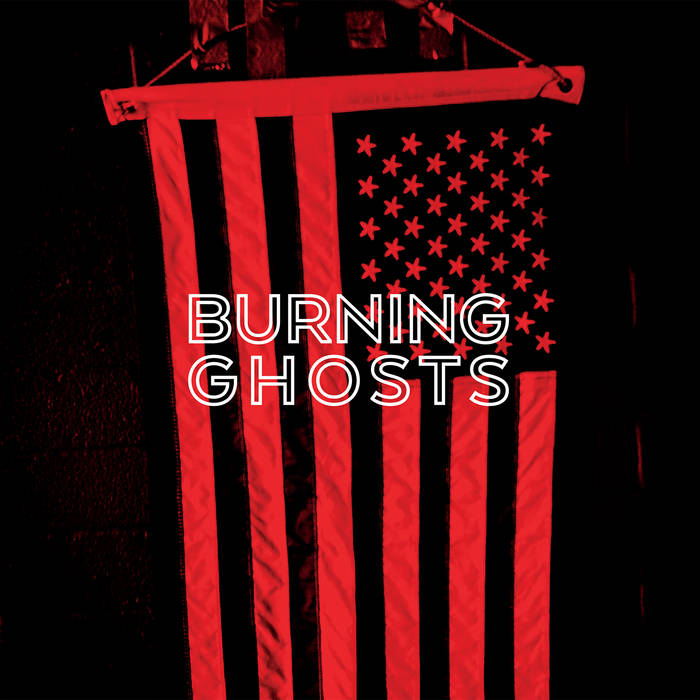 "...unruly...raging...visceral...raw...pure...expressive...a multi-faceted epic... Is Burning Ghosts the ‘Rage Against The Machine’ of jazz? Maybe that isn’t the conscious goal since there are those other precedents; it just seems to be the right time to bring up age-old issues that continue to fester, within the context of music that can match the passion on the streets. But listening to this music leaves the impression that Daniel Rosenboom & Co. wouldn’t shy away from the comparison with that other band from L.A., either."
—S. Victor Aaron, Something Else Reviews

"One of the best bands to emerge from L.A. in years."
—Downtown Music Gallery (NYC)

BURNING GHOSTS explodes from the Los Angeles Underground with an expressionist metal-jazz opus that singes the fabric of a fraying American culture. An ambitious and scathing referendum, this eponymous debut comes at a moment when our civic morality and sense of social justice, our communal values and even our very national identity, find themselves under brutal scrutiny. Holding the mirror close and clear, Burning Ghosts is an uncompromising, incendiary artistic response to ubiquitous injustice. This is music without restraint.

"A timeless meditation on the unsolved problems of economic and racial inequality, Burning Ghosts is a modern jazz protest record in league with the politically-charged efforts of the New Thing, extending the innovations of luminaries like Max Roach and Archie Shepp into the new millennium."
—Troy Collins, All About Jazz

"Daniel Rosenboom has the sort of explosive imagination that triggers creative breakthroughs. Nothing is off limits, and he delights in making high art and anarchy kiss and tumble into bed together...Burning Ghosts, the eponymous debut from a new band, is even fiercer, pressure-cooking an anger that could be the corollary of the Trump phenomenon...Rosenboom’s trumpet is a laser-beam that pulverises any arbitrary lines between idioms, including that between thrash metal and jazz. On the more restrained Elegy the trumpet is muted, but the laser-beam is amplified in terms of emotional impact. The band is completed by electric guitarist Jake Vossler, acoustic bassist Richard Giddens and drummer Aaron McLendon, all players who can engage with the compositions’ demands, and then throw off the shackles to deliver fearless, monstrous performances when required. The constant dialogue between primality, beauty, instinct and intelligence sets this – and all Rosenboom’s projects – apart. Gripping."
—John Shand, Sydney Morning Herald

"The frontline of trumpet and electric guitar is an especially powerful blend. Commencing with “Anthem”, Rosenboom plays some solemn trumpet over the intense, raging guitar-led trio erupting underneath. “Defiance” is aptly titled since it is powerful, tight and defiant. The interplay between the trumpet and guitar is incredible, spewing out fast & furious lines in tight orbits, the entire quartet as one intense force. What makes this quartet so unique is the way Rosenboom's trumpet draws from a more tradition sound while Mr. Vossler's guitar blends jazz, rock and noise elements in equal measure. On "Elegy" Rosenboom's muted trumpet is laid back and enchanting and well matched by Vossler's laid back, skeletal guitar, the mood is somber and contemplative, hence the song's title. "Dissent" starts out quietly and builds in intensity throughout with some inspired trumpet and guitar flurries, crisscrossing and erupting into a grand conclusion. On "Flashpoint", guitarist Vossler gets a chance to stretch out and take a long, spectacular solo, shredding at times before calming down. There is an ancient tug-of-war going on here between the triumphant tone & playing of the Rosenboom's great trumpet and the seething anger of the guitar led jazz/rock trio kicking up a storm underneath. Along with their cohorts in Evil Genius, Burning Ghosts show that they are one of the best bands to emerge from L.A. in years."
—Bruce Lee Gallanter, Downtown Music Gallery Newsletter