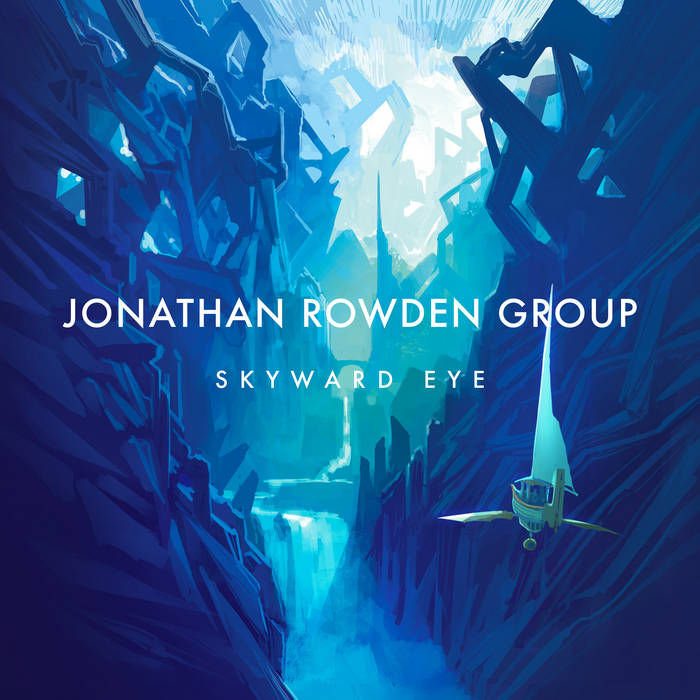 Jonathan Rowden is a name to watch as a signature voice and self-motivated organizer on the Los Angeles jazz scene."
–Joe Woodard, Downbeat Magazine

Almost immediately following his bold 2014 debut, Becoming, saxophonist and composer Jonathan Rowden dove into writing a follow-up album that would continue the aesthetic and spiritual progression that defines his music. Teaming up with friend and pianist Ryan Pryor, they composed music that launched a two-year conceptual transformation, culminating in the Jonathan Rowden Group’s new release on Orenda Records, Skyward Eye.

“Becoming felt like this visceral, raw expression; tumultuous, impassioned and often freewheeling in spirit,” says Rowden. “However, as the new music churned within us, we knew we wanted to take an entirely different approach not only to the music of Skyward Eye, but to the process of making the music from the ground up.”

For Skyward Eye, the quartet enlisted producer Alex Chaloff and embarked on a three-day session of self-discovery. In Rowden’s words, “Together, we agreed that our quest was not to simply record the music, but to collectively discover the greater meaning and narrative and find the deeper character of each song and the album as a whole, WHILE recording it. What resulted was three cathartic days filled with creativity and purpose, filled with the happy accidents that come with the luxury of having that amount of time to create and album.”

Alex Chaloff, who has recorded all of Rowden’s music and films since 2013, described the recording experience in their video documentary mini-series, Making Skyward Eye. “Good music is extremely visual and [though it] transports you into another world sonically, you’re being drawn by the visual, whether your eyes are closed or not. If you feel like you're on top of a mountain, you’ll hear a song and you'll feel a cold breeze come past, you know…it puts you right there.” He went on. “These aren't one or two minute solos where we're 'taking you somewhere'... no, we're REALLY taking you somewhere. These songs have really taken on a life of their own and take you on a visceral journey.”

The music of Skyward Eye is presented in two chapters, both full of compositional breadth, improvised soundscapes and purposeful solos. Rowden and Pryor split the composing load 50/50 on Skyward Eye. They both share many of the same roots and aesthetics - the interplay between their composing styles allowed them to tell a similar story from two perspectives. Drummer and percussionist, James Yoshizawa’s diverse and massive arsenal of instruments (including Japanese taiko drums, homemade metallics, and celtic percussion) are responsible for the majority of the soundscape creation. Bassist Jordan Richard’s bass-choir overdubs create the heart-wrenching soul of the album on the track “Flight.” Songs flow in and out of one another, crafted with care and purpose. Voices and metal chairs became drum hits, saxophone mouthpieces became war-cries, and the breath of a choir became the sound of ghosts of battle, and the laughter of children in the distance. For the group, Skyward Eye became a film without actors, a book without words.

The inspiration in literature, video games and all things now called “nerd-culture” runs deep. For the first 19 years of Rowden’s life, he was obsessed with fantasy worlds found in mediums like video game RPG’s of the 1990’s, where he found a certain depth in the idea that one could literally take control of the characters and live out one’s life through these characters and their experiences. As a child, he immersed himself in drawing, writing, creating universes, cultures, worlds, characters, and mythologies. In this respect, Skyward Eye represents his first literal parallel from his early and deep interests in these other mediums. These interests aligned with the talents of New York Times bestselling author and graphic novelist, Kazu Kibuishi, whose works such as ‘Flight’ inspired much of Skyward Eye’s ethos.

For Rowden, the artwork Kazu Kibuishi created for Skyward Eye is inseparable from the music. After a chance encounter, Rowden reached out to Kazu, who was immediately interested in collaboration. Their first collaboration was in the summer of 2014 where Kibushi painted a massive digital mural during a live performance of Becoming. Two years later, he agreed to create the original artwork for the Skyward Eye album covers, as well as an inner mural and art-book edition.

In a recent interview with Los Angeles-based writer and pianist, Gary Fukushima, Rowden explained what he hoped to convey to listeners of Skyward Eye: “I want listeners to feel like it's okay to escape.” he explained. “I want listeners to imagine themselves on this ‘intrepid airship’ as Kazu delightfully described it, and that they are there with a group of strangers and friends, flying through the horizon into the unknown. Life brings with it so much uncertainty. We can't ever know what will happen. But none of us is meant to face it alone.” Solitude in this binding sense, would run opposed to what Rowden believes it means to be human: “to live as a being imbued with the need for connection and communion.” Skyward Eye is meant to bring people together. From it’s very sound, emphasis on ensemble over solos to its interactive, hand-bound art-book and listening parties the band has hosted.

Jonathan Rowden and his band expressly hope people connect with a sense of spirituality in their music: “that willingness to reach beyond oneself, and embody a larger sense of what it means to be ‘part of all this’ embracing a certain amount of uncertainty, or mystery surrounding it all. In this way, our music is spiritual… The escape doesn’t have to mean running from your quest - a righteous quest can open doors you never saw until you crossed a different bridge, or climbed a different mountain. I am reminded of this little dialogue from the Super Nintendo Role Playing Game “Chrono Trigger”, when a young scientist names Lucca, having been transported through time and thrown in prison on a quest to restore time and order, finds that their robotic companion Robo has been badly damaged and attempts to bring it ‘back to life’.

Robo: [visibly shaken] “C…can you r…repair…me?
Lucca: “Shh, don’t talk” [while fixing him]
Robo: “You…are trying to save our world?”
Lucca: “I don’t know how far we’ll get, but that’s the plan. Anyway Robo, what are you going to do when you’re repaired?”
Robo: “What am I…going to do?”
Lucca: “Yeah. I mean, what plans do you have for the future?”
Robo: “Lucca, no one has ever asked me that before!”

For Rowden, Skyward Eye asks this simple but challenging question. “What will you do once you lift yourself up, out of the mire - your eyes turned towards the vastness - and see the adventure before you?”