The Art of Unfolding, Volume I 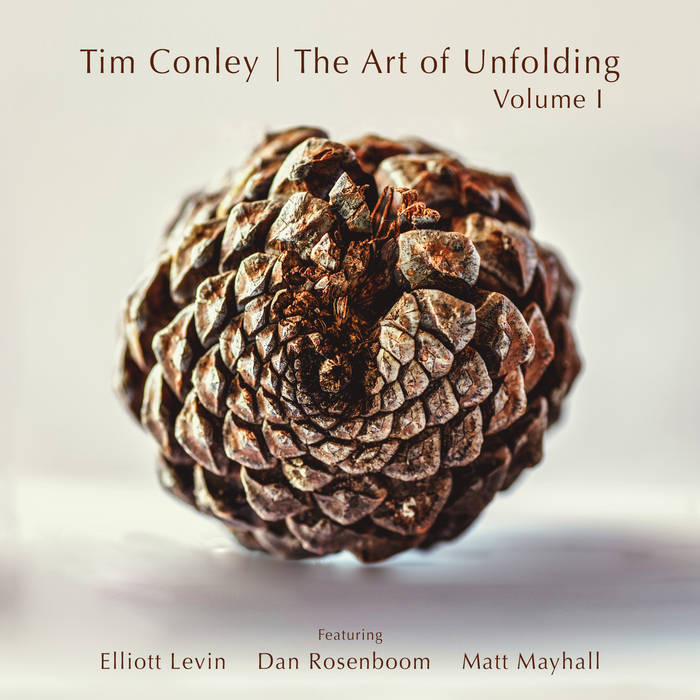 In October 2018, Tim Conley, Elliott Levin, Dan Rosenboom and Matt Mayhall got together at BoomHill Studios in Los Angeles for what turned out to be a supernal, one-take, no-nonsense, improvisational sonic illustration of what Conley coins “The Art of Unfolding.” This nonstop set is segmented into 14 unique tracks, each blooming into the next, as it was performed collectively.

Tim Conley is an LA transplant from Philadelphia, known for his electronic based project MAST, whose latest release “Thelonious Sphere Monk” was a critically-acclaimed re-imagining of 15 Thelonious Monk compositions incorporating modern bleeps, blops and beats with a diverse cast of extraordinary instrumentalists. Conley steps away from the laptop on “ Unfolding” into a role he is much more comfortable with as a pure improviser. His guitar here navigates from spiritually ambient to angularly abuzz and unravels texturally with the use of multiple pedals, kids toys, slides and at one point a screw driver lodged in the strings. Spontaneous from beginning to end, the only premeditation by Conley was bringing this eclectic quartet lineup together for the first time.

Rosenboom and Mayhall are long-time collaborators, but prior to this recording they had never met Elliott Levin, let alone played with this avant jazz staple of the Philadelphia improvisational community. The 65-year-old Levin has had a storied, nearly 50-year career as jazz saxophonist, flautist and poet, performing regularly with the likes of Cecil Taylor, Marshall Allen, Don Preston and Odeon Pope. On “…Unfolding,” Levin brings his signature tenor saxophone virtuosity, uncoiling rapid harmolodics, devotional flute invocations and gritty extemporaneous spoken word.

These beseechments are complemented perfectly by Dan Rosenboom’s inimitable cornet playing. He seamlessly disentangles from the ethereal to the inferno, leading the charge whilst raising the battle flag. Rosenboom is a mainstay of the Los Angeles music scene. Whether it be as band leader, or with groups such as Burning Ghosts or Dr. Mint; a collaborator with artists such as Vinny Golia, Anthony Wilson or Conley’s MAST project; or as a recording and performing artist with film composers John Williams, Hans Zimmer and the LA Philharmonic. Rosenboom also heads the SoCal based experimental music label Orenda Records which will release “The Art of Unfolding, Vol 1” Friday May 24th.

Lastly, masterful amongst all this sonic inflorescence is Matt Mayhall. As a drummer Mayhall is acutely musical, melodic and dynamic and can shift from ghostly counterpoint to a voltaic thundering. The oomph in this unfolding origami sonorousness, Mayhall is another LA transplant, hailing from Reno, NV. He has been the go to drummer for artists such as Aimee Mann, Ted Leo, Jeff Parker, Chris Speed and Fred Armison.

As the title suggests, "The Art of Unfolding, Volume I" is the first in an anticipated series of improvisational explorations by Tim Conley, a guitarist who finds himself at the center of a nexus of improviser communities both East and West, and a musical shapeshifter who's sense of the moment is palpable and prescient. What comes next, will unfold in time.