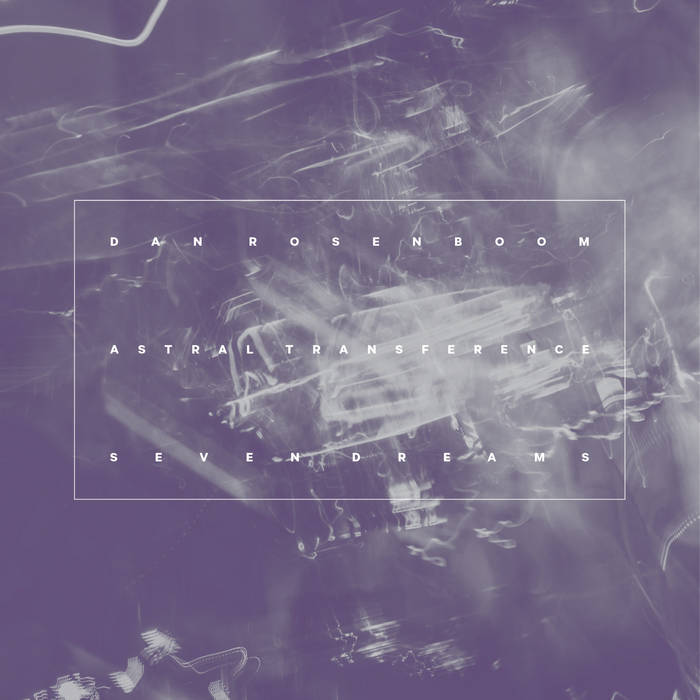 Blending the rhythmic counterpoint and morphing development of minimalism with the explosive freedom of creative improvisation, and the dynamic interplay of jazz with the timbral range of contemporary classical chamber music, ASTRAL TRANSFERENCE & SEVEN DREAMS are swirling, psychedelic and totally immersive sonic experiences.

ASTRAL TRANSFERENCE is a 31-minute piece for jazz octet that blends "minimalist" concepts with elements of free jazz and electronic dance music, in an epic, morphing journey of groove.

SEVEN DREAMS is a seven-movement work for quintet (trumpet, cello, piano, bass, drums) based on a poem by the same title also by Dan Rosenboom (see below). This piece is inspired by and dedicated in gratitude to Dan's first trumpet teacher, legendary avant-garde jazz musician, Wadada Leo Smith.

Both pieces were recorded live at Blue Whale in Downtown Los Angeles on May 7, 2014.

These recordings are completely uncut, unedited, and unabridged.

Orenda Records and Dan Rosenboom would like to thank Joon Lee and all the Blue Whale staff for their ongoing support of our creative music scene in Los Angeles.

I dreamed I burst into the infinite
And in that first breath of life
Tasted vital ecstasy!
I bathed in rays of brilliant light
And reveled in the thrill of virtue,
And howling through the vast expanse
Proclaimed elated purpose!

I dreamed I was an ancient tree
And generations passed beneath my leaves.
At first I learned the many faces
But as time began to blur
All the people became like water
A nameless river through the years
Rarely resting in the afternoon shade.

I dreamed I was a winged insect
In flight for nearly all my life.
Cutting sharply in and out of corners
Whipping wild and past the wind,
And in the fleeting hours of my swift existence
I saw the world’s most micro cosmos
In colors you may never see.

I dreamed I drank the tears of Venus
As she wept for broken hearts.
Her pity flowed from a glowing pinpoint
That dangled over lovers’ eyes.
And all the while she only wished
They’d turn their eyes toward the sky
And remember she was there.

I dreamed I was a mad volcano
Throwing fire at the sky.
I emptied out my glowing soul
To raise the rocks of continents
And render forth the Earth.
And with a torch of searing tempest
Forged the path to Heaven.

I dreamed I chatted with the moon by starlight,
And she told me all her stories.
But through the eons what she longed for most
Was to feel the feet of children
Imprinting on her chalky face,
And to hear their laughter
Break the silence of her midnight.

I dreamed I was an alien
Dancing on the rings of Saturn
The heavens showered diamonds,
Painted blazing strokes across the void.
And on the wings of solar wind
I could smell the dust of bursting stars…
… it smelled like love.

I dreamed these seven dreams
Before I was a memory,
And after I was inspiration,
Somewhere in the nothingness
Where all the stones and flower petals,
And all fantasies and sacred visions,
Were nothing but a whisper.

***Written in conjunction with the music of SEVEN DREAMS, May 2014