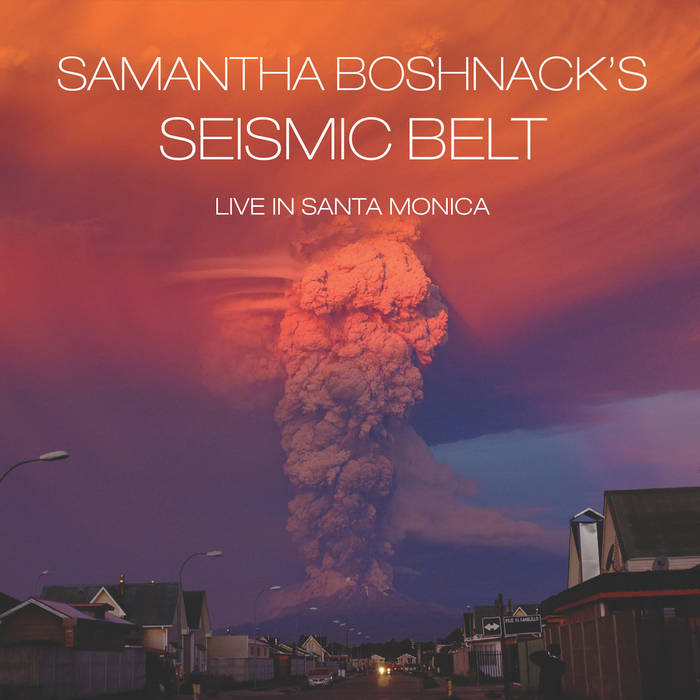 The trumpeter and composer Samantha Boshnack isn’t a geologist by trade, but she certainly thinks a lot about earthquakes and volcanoes. Over the past 15 years, while living in her adopted hometown of Seattle, Boshnack has hiked the environs of Washington’s Mount Rainier and Mount St. Helens with a kind of unnerved fascination. During her travels in places like Mexico and Indonesia, she’s made a point to visit the storied volcanic sites. Throughout her journeys, a couple of questions have persisted: What causes these astounding landscapes and events, and how are they all connected? And how can these vistas be so unspeakably beautiful yet also harbor such a profound potential for catastrophe?

Boshnack’s inquiries led her to an exhaustive study of the Ring of Fire, the horseshoe-shaped region surrounding the Pacific that contains the majority of the world’s volcanoes and experiences about 90 percent of its earthquakes. Her answers, from the purely emotional to the surprisingly scientific, can be found on Live in Santa Monica, the new Orenda Records release by Samantha Boshnack’s Seismic Belt. With Boshnack on trumpet and flugelhorn, Ryan Parrish on tenor and baritone saxophones, Paul Cornish on piano, Nashir Janmohamed on double bass and Dan Schnelle on drums, Seismic Belt is given added dimension through string players Lauren Elizabeth Baba, who solos on viola on track one and violin on tracks two and five, and violinist Paris Hurley, who solos on tracks four, six and seven. It’s the ideal ensemble to tackle these vital, sometimes volatile compositions, and it allows Boshnack to explore the median between the charms of her two primary vehicles as a bandleader up to this point—the 14-piece B’shnorkestra, with its touches of symphonic grandeur, and the small-group avant-jazz dynamism of the Sam Boshnack Quintet.

Boshnack’s eight labyrinthine works are filled with creative allegories, and Seismic Belt uses textures and strategies from both experimental chamber music and the bop-rooted jazz avant-garde to conjure up these natural marvels. Her research also comprised the cultures inhabiting the various locales within the Ring, and Boshnack’s unit interprets these world-music facets in rousing ways.

Live in Santa Monica “examines our relationship with the Earth,” Boshnack writes in her liner notes, “including the elements of risk and faith in that uneasy cohabitation.” With some serendipity, Boshnack’s visionary new project was birthed in a town of many fault lines, Los Angeles. As the 2018 recipient of the 18th Street Arts Center’s prestigious Make Jazz Fellowship, an honor sponsored by the Herb Alpert Foundation, Boshnack was able to work on her commissioned piece within an engaging, multidisciplinary arts community over a three-month period (or, rather, a community within a community, as Boshnack also became immersed in L.A.’s jazz, improv and arts scenes during her stay). The 18th Street Arts Center lists among the top 20 artist-residency programs in the U.S., and the alumni of the Make Jazz Fellowship stand as some of improvised music’s most important young artists, including trumpeter Marquis Hill, cellist Tomeka Reid and saxophonist Matana Roberts.

To say that Boshnack took her commission seriously would be a gross understatement; in fact, few composers have been as committed to the musical expression of an extramusical concept as she is to illustrating the wonders of the Ring of Fire. In “Subduction Zone,” Boshnack’s harmonies collide and coalesce like tectonic plates. “Kamchatka” takes its name from the volcano-saturated peninsula of the Russian Far East, and its music draws upon the traditions of the region’s indigenous people. On the clever “Tectonic Plates,” Boshnack adds ideas above, below and against the main motif, to mirror the interactions among the different levels of the Earth’s shell, or lithosphere. “Summer That Never Came” delves into the cataclysmic eruption that occurred in southern Iceland during June 1783, which created the volcanic chain known today as Laki. The resultant ash and sulfur wreaked havoc throughout Europe, Japan and America, and on the northern tip of Alaska, the polluted air blocked the sun to devastating effect. The composition’s first section takes cues from Icelandic music and aims to embody the frenzy of an eruption; later, with influence culled from Eskimo songs, it shifts into a doleful reflection on tragedy. Propelled by tour de force solos from Parrish and Cornish, “Convection Current” imagines the movement of molten rock within the earth and then outside of it, as lava.

“Choro” is an homage to exceedingly volcanic Chile and an opportunity for Boshnack to tap into her considerable experience in Latin groups. The title is a Chilean word referring to a bold person who is at once daring and graceful, and the gallant music, with its intimations of cueca chora, cueca brava and bolero styles, follows suit. “Fuji” reiterates the project’s overarching theme of beauty and destruction emanating from the same source; with insight gleaned from a quote by the legendary Japanese artist Katsushika Hokusai, Boshnack melds the peaceful harmonies and soulful dissonances of traditional Japanese music with the tumult that defines some of the country’s more contemporary output, like its fertile noise-rock scene. Eighty percent of the planet’s volcanic eruptions occur underwater, and “Submarine Volcano” homes in on one such event, the West Mata volcano of 2009, the deepest ocean eruption ever found. Cornish’s piano engages in call-and-response with the ensemble, in the image of the rich choral heritage of nearby Samoa.

Although Boshnack didn’t begin composing in earnest until she was at Bard College, where she studied with the saxophonist Erica Lindsay, her upbringing in rural New York was filled with music. (She counts a childhood favorite, Chet Baker & Strings, as an unlikely touchstone for her current orchestrating.) Boshnack started on trumpet at 10 and by age 13 she’d become obsessed with Charlie Parker, urged on by her music-buff dad. School bands and summer music camps led to Bard, and during college she also studied with Boston-area trumpeter Jerry Sabatini. After graduating, Boshnack migrated west and set up shop as a working musician and composer in Seattle, where she could find a healthy balance between the quietude she needed to create and the activity she required to make a living. It proved to be a fruitful choice. In addition to earning some of the most esteemed commissions and residency spots currently available to jazz-rooted musicians, she leads her own groups and is a part of the acclaimed composers’ collective Alchemy Sound Project. She has also toured extensively in the zany, postmodern Reptet and performed or recorded with such artists as Wayne Horvitz, Butch Morris, Eyvind Kang, Jessica Lurie, Bobby Previte, Amy Denio, Jim Black, David Byrne, Terry Riley and Robin Holcomb.

Boshnack sees Seismic Belt as an ongoing project whose concept could easily spark new work. “I feel a lot more music could be written about the Ring in Fire,” she explains. “There are so many more places that are affected, and I want to find out more about the myths and stories and coping methods by those who’ve lived in these places.”

Recorded at Crossroads School for the Arts and Sciences, Roth Hall, Santa Monica, CA, on April 13, 2018

Special thanks to Stella Rossi, Mark Boshnack, Daniel Rosenboom, Chris Credit, the Herb Alpert Foundation, the fabulous folks at 18th Street Arts Center, and the incredible musicians who leapt into the fire with me.