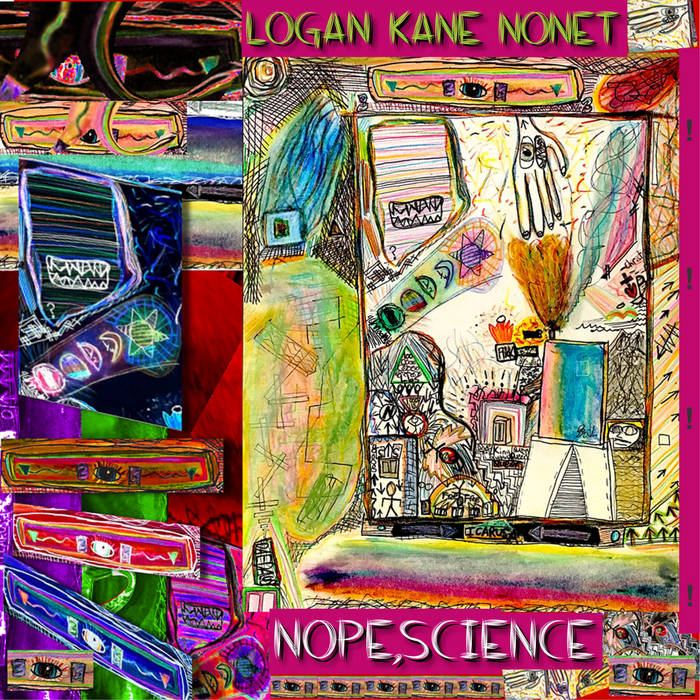 Logan Kane, a rising-star bassist and composer in Los Angeles’s thriving jazz scene, releases the debut album of his dynamic nonet, NOPE,SCIENCE on Orenda Records, featuring free jazz heavyweights, David Binney, Dan Rosenboom and Katisse Buckingham alongside with staggering new talent. At just 23 years old, Logan Kane is an award-winning soloist, who has studied with Ambrose Akinmusire, Peter Erskine, and composer Vince Mendoza. He is impossible to classify, equally comfortable on upright bass in the jazz world and bass guitar in the punk world (with punk-funk outfit, Thumpasaurus). As a composer, he draws heavily off his jazz and classical chops, but casts a wide atmospheric, alternative shadow with elements of math rock and contemporary classical. NOPE,SCIENCE presents a new and genuine vision, fueled by the excitement of the current Los Angeles renaissance, and introduces an enigmatic and innovative compositional voice to the international jazz community.

Kane’s song titles and ideas highlight a certain levity in concept, but this play happens within serious abstraction. The constantly evolving and unfolding compositions demand close attention from beginning to end. The nimble band navigates rhythmic, melodic, and contrapuntal challenges, coexisting from moment to moment with fearless free jazz solos by award-winning improvisers. The great alto saxophonist, David Binney also contributes two brand new pieces here: one, a daring prog-rock meets Arnold Schoenberg epic “Proximity 7,” and the other, a gentle arrangement of the late Allan Holdsworth’s beautiful piece “Above and Below.”

“NOPE,SCIENCE is a philosophy that I infuse into every one of my compositions with fervor. It is a place where I feel completely free and is sometimes accessed easier after 2 am. This headspace is where I really let the paint fly, and I’m confident that every piece on this album is a great example of NOPE,SCIENCE.” - Logan Kane

The Logan Kane Nonet boasts a “who’s who” lineup from the vibrant jazz scene in Los Angeles right now. Aforementioned David Binney is joined by one-of-a-kind flutist/vocalist Katisse Buckingham (of Anchorman Will-Ferrell-jazz-flute-solo-fame), and classical-to-jazz master/first-call trumpeter/Orenda Records founder, Dan Rosenboom. Supporting these juggernauts are L.A.’s fierce new guard: Jon Hatamiya on trombone, Megan Shung on violin, Henry Solomon on baritone saxophone, Benjamin Ring on drums, Luca Mendoza on piano, and of course, Logan Kane on bass. The nonet provides a rare situation wherein established pros lay the solid bedrock on which the fresh new crop jazz musicians can build and hone their craft. Many are in their early 20’s, launching their careers, and the excitement is palpable. The pure joy of creation and in-the-moment energy courses through this impressive collection of genre-bending compositions.

With NOPE,SCIENCE Logan Kane steps forward with musical statement well beyond his years. He shows compositional vision, improvisational acumen, and group leadership that few seldom attain at any point, and one can only imagine what will develop as his career takes off. If this album is any indication of the aspirations of the next generation of jazz innovators, the future looks exciting indeed.

"Above & Below" composed by Allan Holdsworth
Arranged by David Binney (SESAC)

"Orenda Records is a small Southern California label that punches above its weight... Orenda’s offerings are informed by rock, modern classical, and jazz, and combine these genres in a natural, organic fashion... Orenda’s musicians grew up in a post-Braxton era where musical styles are viewed on a continuum rather than as individual silos of expression."
–Avant Music News ... more

Featuring Gary Bartz, 5 years of Rhythm Section Intl and an LP of the week by Nicolas Jaar